It’s human nature to approach complicated issues that we have little to no understanding of with an unearned badge of confidence. Whether you’re a secular “evidence-based” thinker, or someone who bases their ideologies off of a religious and traditional viewpoint, we’ve all been guilty of this. Simply put, it’s easier to think in terms of an ethical black and white, rather than the excessive shades of grey that real moral thinking throws at us. As Dr. Glenn Geher explains in Black-and-White Thinking in our Social Worlds, our highly-evolved hunter-gatherer brains used this kind of moral reasoning to efficiently build societies and groups that protected us. But it’s also the leading cause of political strife today.

Unfortunately, this fatal flaw has become more and more apparent in the vitriolic debate about abortion. Scientists, philosophers, lawmakers, priests, and everyone in between seems to have a strong belief on this topic, held together by a set of apparently indestructible arguments and a false sense of moral superiority. Even the labels “Pro-choice” and “Pro-life” are inherent in their demonization of the other side. As David Rubin of The Rubin Report put it in a segment about abortion, the political left often paints conservative pro-life advocates as people who hate women and want to control them. On the other hand, the right likes to portray abortion activists as baby haters – neither one is obviously the case. What is true, however, is that the ethics of abortion is a vastly complex subject that absolutely no one can truly make an argument for – or against.

With the Supreme Court now pondering the same questions that pro-life and pro-choice activists apparently have all the answers to, the abortion rights issue is back in center stage. If Roe v. Wade, the 1973 landmark case that protected a woman’s right to an abortion (under some restrictions), is overturned, the availability of abortion would take a severe blow. Without federal protection in the legality of abortion, the question is turned back to states. And, as NPR reporter Julie Rovner states, at least 22 states already have complex legal statutes that would make abortion illegal. So that’s where are right now, with the continuous philosophical debate being pushed back to the Supreme Court.

Already, my Twitter feed is inundated with well-meaning, tear-jerking calls to action from both sides. And for the most part, people on both sides seem completely morally unconflicted about their choice. But what are the arguments on either side – and what merit do they hold? 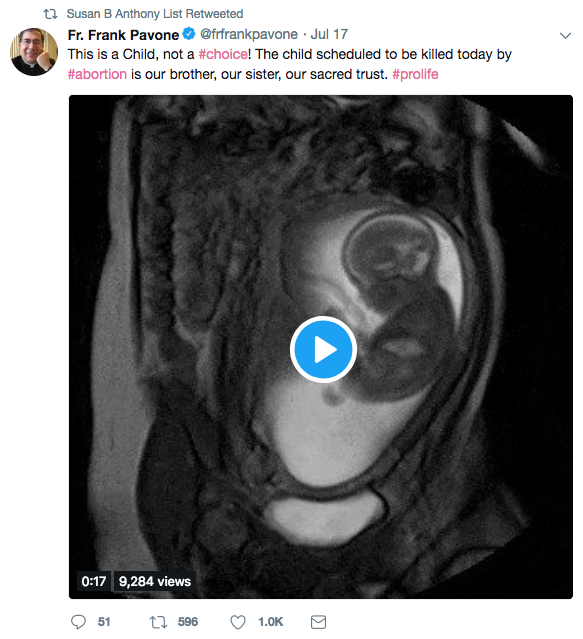 An example of pro-life sentiment on Twitter, featuring a video ultrasound of a moving fetus.

Before I begin, I want to admit my bias: I’ve been pro-choice for a while. That, however, doesn’t stop me from wanting to unravel the mess of logic from both sides of the debate.

The Most Common Pro Choice Arguments:

With both sides comes a degree of certainty in their idea of what life is: for pro-lifers, it begins from the moment of conception, or at the very least, when the fetus starts moving. For some of the more extreme pro-choice arguments, a fetus is not alive at all: not until it is out of the mother’s womb. And both sides, unfortunately, have very little to go on. How can we decide what life really is? Here’s where the issue of simplistic black and white thinking comes into play:  both sides portray the other’s arguments completely inaccurate, morally bankrupt, or scientifically invalid, even though there really is no clear framework for defining what life is.

Is an embryo a human life? Then why do IVF clinics still discard potentially viable embryos with no moral cost? What about a fetus that is moving and sucking its’ thumb? Who’s to say that movement equals human life? What about consciousness and self awareness? What about the ability to sustain itself independently? The reality is, this split in thinking is unable to ever be answered. Even if we somehow were able to insert microphones into wombs to ask a fetus if it wanted to live, what right does the mother have? Why does she have to give away months of her life, accept a risk to her life, and accept lifelong changes to her body? If a pregnant woman attempts to commits suicide, survives, but inadvertently kills the baby, is she a murderer?

The last scenario might seem a little far fetched and unnecessary, but it’s a true story. In early 2011, expecting mother Bei Bei Shuai, wracked with depression after her family fell apart around an infidelity scandal, attempted to commit suicide. Her fetus died, and the state of Indiana tried to charge her with murder.

The continuous debate between the autonomy of a pregnant woman and the autonomy of a fetus is full of continuous contradictions such as this one. Why was Shuai convicted with criminal recklessness for the death of her daughter, while abortion is legal in Indiana? One could argue that the end result is the same. And does it matter why a woman decides to abort? What if a woman, pressured by her culture’s idea of gender, aborts a female fetus just because it’s female? What if the fetus had a physical deformity the mother just didn’t like? What if it had Down’s Syndrome?

And on the other hand, what if a woman was stuck in an abusive relationship and couldn’t introduce a baby to that environment? What if she was homeless? What if she just found out she was pregnant at 20 weeks, and now is being told in a cold doctor’s room she has a second heartbeat inside of her?

These are all questions that make the abortion debate more complex and morally grey than either side would like to make us believe. At the end of the day, there is no moral high ground when we tackle issues of life and death – particularly because we still don’t truly understand it.

As scientific exploration in genetic science and human biology continues to expand, the abortion debate may someday seem like a distant relic of a moral dilemma. When modern abortion techniques were first invented in the early 20th century, the idea that one could see their fetus kick and move, know it’s gender, and know exactly what diseases or deformities it had, was unimaginable. Pregnancy, and the idea of a growing fetus, was more abstract than a live ultrasound shows us now. Now, when we see what some would describe as a ‘lump of cells’ move and grow, it’s hard to dismiss the fact that there’s something there. Something that was unimaginable to people a century ago.

Despite all this, I’m still pro choice. Why? Because, as I view it, abortion is a health service – one that has been in use since the beginning of human history. Probably since the first regrettable one night stand. And the modern invention of safe abortion techniques that don’t damage the mother is, ultimately, a positive thing for healthcare. Now that we have those techniques, it would be morally reprehensible to withhold and criminalize a vital reproductive health service. What we can do, however, is decrease the risk of unwanted pregnancy as much as possible. That means increasing access and education of contraceptives, increasing the effectiveness of birth control methods, and providing non-judgmental, unbiased counseling and support for pregnant women.

And finally, let’s stop pretending we understand the complexities of abortion – and even worse, simplifying it to the black and white ‘facts’ – like a fetus is just a mass of cells, or that life begins inherently at conception. The simple fact is that we don’t really know. And it’s okay to operate in the morally grey. It’s okay to look at the “least worst” option sometimes. It’s okay to acknowledge that we might feel scared or uncomfortable with either side of the debate (Is forcing pregnancy okay in cases of rape, when the mental trauma could be devastating? Is it the mother’s right to terminate a near-full-term pregnancy due to a physical deformity?). In a matter between the right of an innocent, defenseless lifeform and the fundamental right of a woman to control her own body, I don’t think any answer will feel like the right one.

The Atlantic – Science and the Pro-Life Movement

Since the advent of modern news, and the ability to broadcast and manipulate it to people all over the world, it seems as if our world and our societies are more unstable than ever. And with the widespread use of the internet, it doesn’t take long for us to stumble onto a heated political discussion, complete with angry all-caps rants and long threads of mudslinging “left-wingers” and “right-wingers”. In fact, any discussion of remotely political issues can turn into a bloodbath – a study by the Pew Research Center even found that after the 2016 election, the most common Facebook reaction to lawmakers’ posts was anger.

Of course, political parties and dividing threads in our social viewpoints have always existed, but when literally anyone can share their God-Given Backed-By-Completely-True-Science Never-Incorrect opinions on anything from abortion rights to foreign policy, it can become difficult to feel like any source is an objective one.

Unfortunately, our political divisiveness has transcended the limits of Facebook walls and Twitter rants and now, it seems that everywhere we turn, monolithic groups of angry activists are proclaiming a war on everyone against them. No longer is there a space for common ground, growth, or civil discussion. Instead, we become caught in circular trains of thought, fueled by the people we surround ourselves with, and the environment we are a part of.

But here’s the thing: We all probably like to think of ourselves as inherently good people. Whether we’re conservative or liberal, white or black, straight and cisgender or LGTBQ+, nobody wakes up in the morning thinking “I’m so evil – I want to attack free speech and take away basic human rights!”.

But from the portrayal of the left and the right that we see in the media, to members on the opposite end of the ideology spectrum from us, we might as well be monsters. And now more than ever, the gap between us seems to be growing wider and wider, until it seems like it would be impossible to find common ground.

A June 2018 poll from Gallup found that, while around 60% of Americans were either consistently liberal or conservative (split pretty evenly), a shocking 43% considered themselves independents. Compared to about 35% in the 2000s, this number may seem inconsistent with the ideas of deep polarization and unavoidable gaps.

That may be because the loudest voices are often the most extreme. In a state of affairs where outrage and shock value lead to the most clicks and views (and thus, more money), levelheaded discussion and debate aren’t a high priority. It’s easy and a bit self-serving to be able to see a “crazy” left or right-winger do something completely awful, and immediately encompass half of the nation into a neat little box labeled “ignorant racists” or “politically correct snowflakes”. It’s easy because it doesn’t have to make us acknowledge our own ignorance and potential biases. It doesn’t force us to grow or think or change.

Outrage and self-righteousness can only get us so far – and it certainly won’t get either party to the future they hope to see for the nation, and the world. Compromise, understanding, and compassion are what we need more of, even if the other person doesn’t seem receptive to our efforts. And, most importantly, we need to challenge ourselves to grow. Even if it’s uncomfortable, even if we feel attacked by someone’s views. In every person’s “crazy” viewpoint, there’s a glimmer of truth and life experience. To grow, we must challenge ourselves to try and find it.